I arrived in Zurich and I met some guys, latins and europeans who had a band and were going to give a concert at their house that night. Due to I didn´t have any place to spend the night I went there. It was an usurped house, but in middle of the night police arrived and cancelled the party. 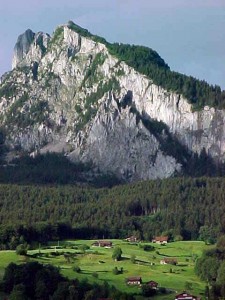 My way in Switzerland went on towards Interlaken, one of the first areas that was opened to the tourism in the middle of 19th century. Nowadays, the city lives almost exclusively on the tourism, with skiers in Winter and buses full of visitors in Summer.

During my travel around the areas of the interior, I discovered the way of life of people who live in the country. Almost everyone has their own livestock and a very big corral for their animals; they usually store the pasture for them because Winters are long and cruel, maybe one of the things that marks their personality. The streets of the towns I visit are empty, maybe this is one of their habits: to spend more time inside their houses, to be not very sociable.

I notice it in the streets, sometimes people look at me, … as if they were curious about where I come from, or how many kilometers I travelled with my bike. Anyway, they hardly come and ask me some question or just smile at me. I look at some of them and wave my hand but they look to somewhere else, as if they were hiding.

But, as in every place of the world, there are very kind and helpful people, and sometimes they accompany me with their cars to some place when I asked them where it was. 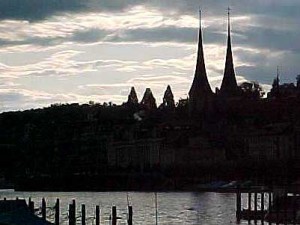 Finally, it rained during all my way to Lucerna and Zurich, except the last two days. Lucerna, as I was told, is a very beautiful city, with only 60000 inhabitants, and it looks like a scale model. Then, I went to Schwyz, where everything looks like the land of Heidi: big mountains with green grass and delicate little houses. By the minute I felt like inside a tale.

There I went to see some people of Victorinox, who I had introduced my project to, some months before. And I wasn’t lucky, during my travel to Schwyz I got tired of calling the responsible of sponsors, but he was always busy. And when I finally went to his office I was told he had just gone on vacation. It’s hard to believe, I got 25 sponsors in Africa, and here in Europe I got none.

I arrived in Zurich at noon, and after travelling a little around the city, I stopped in one of the main streets to sell my little dolls. There I met some guys, latins and europeans who had a band and were going to give a concert at their house that night. Among them there were an argentine, a bolivian and a mexican guy who explained to me that it was an usurped house and if I wanted, I could spend the night there, too.

Later I met Gavin, a southafrican guy who was travelling without direction, he was carrying a little backpack and had no place to spend the night. After chatting for several minutes, he asked me: Where are you going to spend the night? … and the first thing I thought was he was asking that question to the wrong person.

But I felt sorry for him. In Switzerland, people are very cold, and I knew he wouldn’t be ever invited to spend the night anywhere, so I told him about the usurped house and we agreed to meet each other there.

I arrived there first, there were people from several countries, about thirty persons, and some of them weren’t very friendly, there were pots with noodles, drinks and some grasses. The guys played very well, everybody was euphoric and it was a real party. But by the minute I began to regret being there. I was tired and wanted to sleep.

Ten minutes later the southafrican guy arrived and after him it came the police, the neighbours weren’t very happy about the noise. Some guys went to talk to the police officers to prevent them from coming inside while my friend Gavin, who had just arrived and without being invited began to be hated by the others. I didn’t understand the situation, I just listened to the southafrican guy telling me very worried: “We have to get out of here, there are many police officers at the door, who came after me and it looks as if I brought them here”,   it was obvious that wasn’t that way, it was just bad luck. But the cops were there, and they wanted to come inside the house.

Immediately I thought: “Shit!!! That’s all I needed: I can go to jail without having had anything to do with it, with my bike and all my staff”. And among clouds of smoke and a little scared, I didn’t know what to do and hesitated between running away and facing the situation; but luckily they came to an agreement: they turned off the music and the police officers left.

Then they told me that smoking pot is not very dangerous in Switzerland, and that’s true, around the country I saw people making a joint in the streets or in a square as if it were the most natural thing in the world. 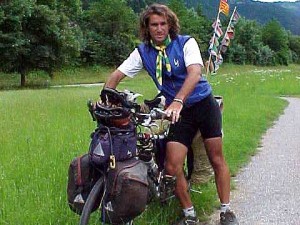 Finally, I found a place to spend the night around 2:00 pm, and the southafrican guy came with me.

In the morning I said goodbye to my friend Gavin, who stayed at that house, and I decided to go on my way; and after wandering around the city I left to Wil, around 40 km away from the frontier with Austria. There, I spent a quieter time; I stayed at Barbara’s house, an austrian friend I had met in the south of France and I rested; I needed to do that, at least for a few days, after that long and a little difficult travel around Switzerland.