The negative of the Libyan consulate in Tunisia to obtain my visa forced me to go back to Italy. It was winter time and I stayed a couple of weeks with Gianpie´s family in San Felice a Cancello, where I had some of the best memories of my trip

I returned to Italy for third time, the negative of the Libyan consulate in Tunisia to obtain my visa forced me to go aboard again toward Sicily, in the middle of European winter, but I didn’t make myself problem, because I foresaw that the south of Italy still keep one of my best memory in my trip.

It was the end of January and the cold weather and the rains didn’t allow me to project, for this reason I stayed some days in Palermo, at Daniela’s home, the girlfriend of Fabio who I had known in London a time ago. I also called to Clara, a girl from Palermo who I had not forgotten, but at that time I had bad fortune because she was in a trip in the north of Italy.

By this way some days ran, I sold some of my pictures in the galleries or in the antiques market during weekends. But in Sicilia, my sales were never so good, so after some days I went aboard again to Naples, hoping the cold weather allows me to advance in route to Greece. 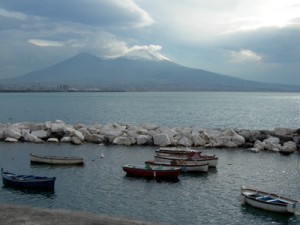 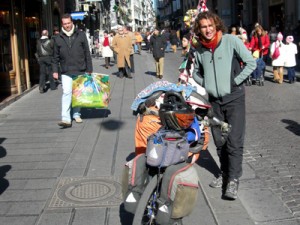 But another time Naples and their surroundings take me as a favourite son; the good weather always helped me to sell in the streets, at least during the weekends and by this way my sales in the road Toledo were much better; the Neapolitans never doubted to collaborate with my trip when they knew that I was from Argentina.

I also met, Donald, an Irish guy, who I had known the first time; according to him, he was living in a palace so I didn’t doubt to visit him, but when I arrived there I noticed that his palace was an occupied house which shared with some punks, and it was colder than outside, so although Donald was a nice guy I stayed there only a couple of days. 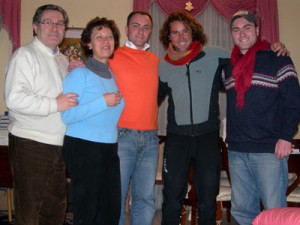 After a couple of weeks in Naples, I visited the Ischia Island and I called to Gianpiero, who I had known in Finland in the summer of 2004. Gianpie lives to 35 km of Naples, in San Felice a Cancello and when he knew that I was around he didn’t doubt to invite me to his house, where his family presented me one of my best memories of my trip. It was during two weeks that I felt myself like a distant relative. I remember when we lunched together, and his grandmother asked me about my trip, she was worried about me.

Gianpie is philosophy student and in spite of his 23 years old I found him a guy with a great reason, I liked to talk with him, and France, his twin brother, is a political sciences student and already the secretary of the Young Department of Caserta Province. I was surprised with their insistence to found me a sponsor, Gianpie called and concerted interviews with as many people or relative wealthy as he was come to his mind, even his father accompanied us to one of them, perhaps if I had stayed more time we have gotten something. At the same time France also contacted some political contacts, and some of them promised me; but I didn’t find these politicians in Italy different to the rest, whom I had already presented the project in other countries.

My days in San Felice a Cancello were also good to make a visit to the dentist, a family’s friend, and even to visit the hair-dresser, who was the world champion. And by this way I knew more and more about the life in a town of Italy, where there is more free time than concerns or obligations; I remember when Gianpie took me to the central square, where I never ended to know all the members who frequented it, that square resembled a big club.

I enjoyed it. I remember the carnival night when Mario and the rest of the guys took me to dance to a pub where everybody were disguised, we drank a lot of beer and we ended dancing on the tables. “It is the life here” Gianpie said to me; “usually in the town one marries very young and with his lifelong girlfriend”. 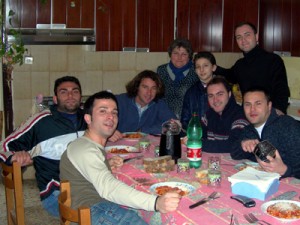 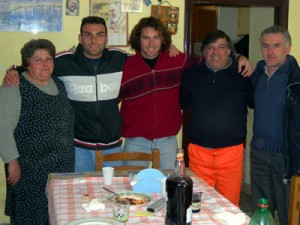 And I can’t forget that day at Pepe’s home, a traditional family who elaborated its own sausage and its wine. They raised rabbits and hens, had cultivations and a firewood oven to cook bread and pizzas. I remember the Pepe’s father, he was without T-shirt with his giant paunch and screaming me in Neapolitan: “Come to eat, come to eat”

San Felice a Cancello was my house in the south of Italy and its people like my family, thank you Gianpie!!!