I met Clara in Palermo, Sicily in November of 2005, when I was travelling to Tunisia. But my destiny made me go back and met her again, to live the prettiest love story that happened me in my entire trip. 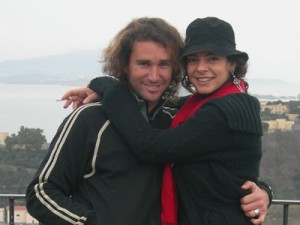 After a couple of weeks in San Felice a Cancello I returned to Naples and I met Clara, or my princess as I liked to call her, who after graduating in Archaeology began her career of post grade in Salerno, to 70 km of Naples. In this way during some days we lodged in a bed and breakfast and then in the most economic hotel of the city. It was amusing as she looked at the sheets of the bed and when she said to me that she could adapt to everything with me. By this way in few days we fell in love, impulsively in spite of our lives were so different.

The first time that I met Clara was in Palermo, Sicily before travelling to Tunisia in November of 2005, but that time we were together few days because I left quickly to meet my brother who came from Spain to travel with me during a couple of months. From Tunisia I planned to continue to the north of Africa, but the Libyan bureaucracy forced me to go back another time toward Italy, and by this way to live together with Clara what had been pending. And to meet her was the prettiest thing that happened me in my entire trip.

Libran like me, a rebellious and with gypsy’s air, Clara told me that she was not identified with that she was doing, and thereby she asked me to take her with me. By this way we allowed to grow our illusion, in the craziest way but also of the prettiest. 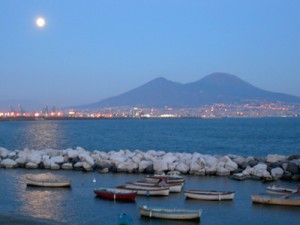 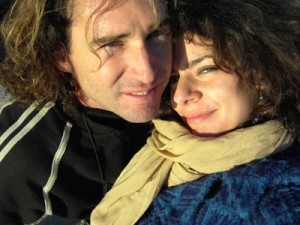 After almost two weeks in Naples we travelled to Sicily by ship, and also that week in Palermo was perfect, Clara took me to walk to as many places as she could, she took me to eat to typical places and due to she was alone she carried me to her parent’s house.  Also during two days we have been a short trip with our bicycles, in which we travelled 100 km, and in spite of the cold weather we camped. It was very nice and thereby we thought over: “Why not to go on together around the world?”

Waiting the right moment we returned to Naples, and while Clara went to her classes I went to the Toledo street to sell my pictures. By this way other two weeks passed, increasing our passion and also our madness.

At the end of her classes in the university Clara returned to Palermo to speak with her parents, and she told them about us and our projects; but since then a real hell began.

Typical traditional family, from Sicily inlands, I had to have listened to my friends from San Felice a Cancello, when they told me about Sicilians that they will never accept a relationships without marriage and it was obvious that in our case everything would be worse. 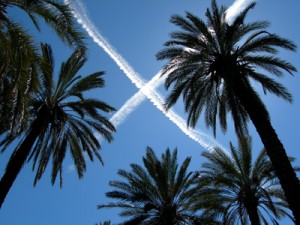 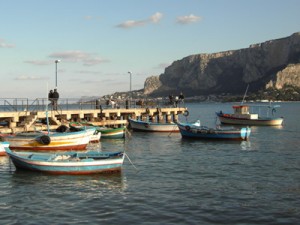 In spite of the fury of her parents we decided to make a trip together, thereby we left Palermo toward the west. That afternoon we cycled 60 km and then we camped in a very calm beach. The following days we cycled through the mountains and Clara surprised me because she was always ahead. She said to me repeatedly “I like this, I see myself in Greece with you”. So we kept dreaming”.

That afternoon we arrived to Castelvetrano to visit Linda, her partner of the university and then we cycled to Triscina, where we stayed in the Toto’s weekend house, the boyfriend of Linda and we enjoyed it, we were calmer than in Palermo. That night Toto and Linda took us to go for a walk and on Sunday we went to the beach and with friends they invited us with a barbecue. 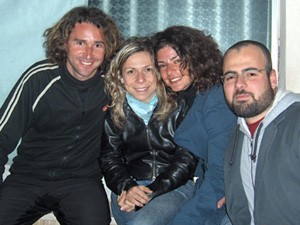 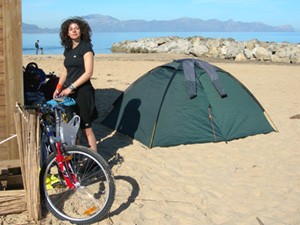 Our Sicily trip continued toward Sciacca, according to Clara, I didn’t have anything for being worry, because in Sicily she was the guide, but this was not always by this way because in more than one occasion we took the longest road or the most mountainous, I remember the last night to camp, we had to cycle many km more to supply us with food and water. But it was worthwhile, because when we arrived to Eraclea Minoa the place was perfect. That day we had been100 km and I finished more tired than Clara. 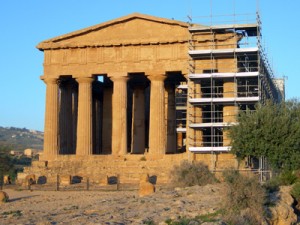 Finally we arrived to Agrigento after many ascents and once with several route errors. To the entrance we went to the Temples Valley, Agrigento was the city where Clara studied the University and obviously where she shone like guide. According to her the ruins date of the V and VI century and they are counted among the oldest complexes of Greek buildings outside of Greece.

That day Toto was in Agrigento, because he also studied there. For this reason we stayed in his house with his two friends. I remember the second day, after a week of trip, Clara received a call from her sister who lives in the north of Italy and she began to push her to come back to home. So that day we discussed and thereby I decided to leave. The comic thing was that Toto came to ask me to don’t leave, but I was so angry and didn’t care. Thereby Toto and his friends told me in good way that if I leave they would have to react and by order of Clara they wouldn’t let me to go away and if it would be necessary they would use the force. I thought that they were joking, but it was enough to look at them to their eyes. I could not believe it, I was in Sicily, suffering and kidnapped by a woman?

The following day we were destroyed, and while she was buying her ticket train I felt impotence and a big sadness, but I couldn’t do anything. During that month which I was in Italy we met each other twice more, but she never had the willpower to leave everything and to come with me, as she said to me.

Thereby I left to Greece, in spite of I had fall in love with her.