I stayed in Korea during 3 weeks, it was August, 2010 and the rainy season was running its course. The distances between the main cities were not more than 150 or 160 km, thereby when it rained I preferred to get soaked cycling than camping.

I arrived to Korea by ferry from Japan, and when I disembarked at once I noticed a big difference with his nearby country, since the order and the cleanliness were not qualities so distinguished like wherefrom I was coming. Rather it seemed to me that I was returning to China.

After a night trip the ship stopped in Busan, the second largest city of the country, which then I confirmed that it is the nicest; due to its beaches and a nice promenade. During my stay in Busan I was lucky because Mat received me at his house and despite the rain I could sell my photos and souvenirs in the street in order to collect some money to keep cycling; and it was going well till police ordered me to leave the place.

I stayed in Korea during 3 weeks, it was August, 2010 and the rainy season was running its course. It was raining almost every day of my stay, but in contrast to Japan I was lucky because I was welcomed by foreigners in every city that I visited. The distances between the main cities were not more than 150 or 160 km, thereby when it rained I preferred to get soaked cycling than camping, because when it started to rain, it rained during days.

On my way to the capital city, I cycled through the interior of the country, through the mountains, crossing forests, rivers and the main cities.

Most of the persons who received me were from U.S. who came to South Korea to teach English. “Never lack work” Garret said to me, “Korea is one of so many countries from Asia, where the demand overcomes the offer, and where they pay better when we talk about teaching English; one hour is paid between 25 or 30 u$s, and with little luck the contract can also include the payment of the rent of the house. But it is an exhausting work”, Garret kept saying to me, “I have a class of 40 students, and I don’t have patience, but I do not do as the local teachers who have a rod to beat the students who behave badly. I came here to have a new life experience and certainly to save some money, but after one year I wish to come back to my country, it is not easy to live here, because it is practically impossible to mix with local people.

In Daegu, I contacted though internet to Mike from USA, and I was surprised by his reception, because although he was in another city and we didn’t know each other he sent me the key by a friend and he allowed me to stay in his house, alone and per two days. I met him just during the morning when I was leaving. Mike seemed to be one of these incredible persons when the issue is about giving a hand. 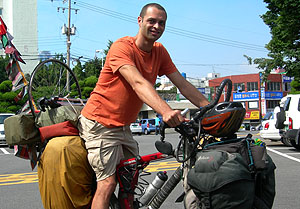 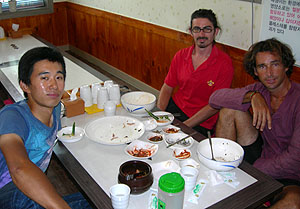 My last day on the road I stopped in Suwon, where I was welcomed by Guillermo, Eric and other boys, who got a scholarship to the Suwon University. They were from Guatemala, Mexico and other Central American countries. According to them, in 2010 the Education Ministry of Korea has adopted a new educational program, duplicating the number of scholarships for foreign students with regard to 2009, although as requisite in the majority of the scholarships students are demanded to learn Korean. And I was surprised because I didn’t expect to find so many foreign students in Korea, and they were from several countries from Europe, Indonesia and even from Africa too. Then Guillermo said to me: “the South Korean educational system is technologically advanced and it is the first country of the world which took the broadband Internet service to every elementary and secondary school. With this infrastructure, they are developing digital books, which shortly will be distributed free to all the schools of the country”.

Cycle South Korea took me 6 days; it is a small country in which its routes cross many cities and few field areas. I camped just twice, but I couldn’t mix with local people, perhaps thereby my trip in Korea was monotonous and slightly interesting.

And as Japan, Korea is an expensive country, the cheapest room per a night can cost not less than 35 or 40 u$s.

When I arrived to Seoul Ryan received me at her house, and then Andrew, they were both English teachers from U.S. Andrew was planning to get married with his Korean girlfriend and thereby they were planning to travel to his country and stay there. But since the date was arriving Andrew was facing up a war with her mother who since two years was disagreeing with their relation. “For the Koreans it only counts the study and the work, and to be the best in everything. Only they worry about being accepted by Seoul University (the best university) and being employed at Samsung, the most important company of the country. The son’s happiness is not important, believe me”, he said to me furious.

During my 10 days stay in Seoul I have visited the Palace Gyeongbokgung of the Choson dynasty (1392-1910). Also I visited the Bukchon Hanok village which most of their house have traditional Korean architecture, and the commercial areas of Iteawon and Insa Dong where I stayed with my bicycle to sell my photos and souvenirs, when the weather let me. But I was not lucky, because for the most of Koreans it was as if I was not there. Finally I visited the War Memorial of Korea, the museum which explains the turbulent history of the country with his numerous wars and invasions, mainly from China and Japan. But it was after the Second World war, that the War of Korea (1950 – 1953) came up. The warlike conflict was the consequence of the Cold War, in which the United States and the Soviet Union wanted to implant his model of government in the whole world. Capitalism vs. Communism; and as a result Korea was divided in South Korea and North Korea. 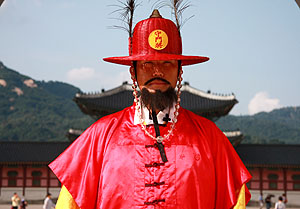 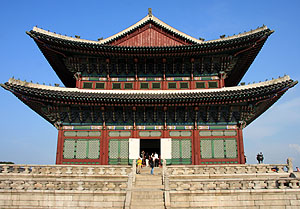 I also contacted the Argentina embassy where I was welcomed by Alicia Falkowsky and Federico Morchio, who helped me to be introduced to some companies. But the Korean companies didn’t differ from Korean people, neither from other Asian companies that I visited during the last year. But fortunately the Argentinean Company Tenaris has base in Korea and thereby I met his Director Ronald Rocher. And as in Dubai, Tenaris made a donation: “the reason” Ronald said to me, “that you keep cycling around world”. 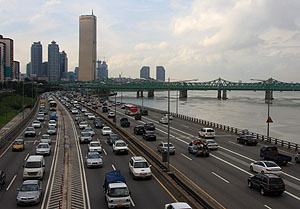 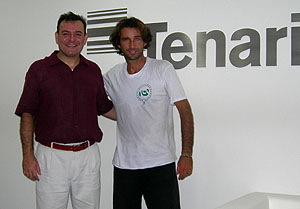