Along my trip through Europe, I was noticed several times about the south of Italy. But when I arrived in Naples I forgot my fears and I was integrated to the disorder of its streets allowing me to wrap by its people’s warmth. At the departure’s day I already had a list of telephones and people’s addresses to stay.

In route to Naples

On Monday November 1, 2005 I left Rome, the sky was cloudy and it was cold. For this reason on the end of the afternoon I began to worry where I would sleep. But suddenly a car with three people appeared screaming me: “Pablo, Pablo!!!!” I could not believe it, in the car was Claudia and her son with his girlfriend; I had known Claudia in Portugal 4 months behind while I was selling my pictures in the street; so after talking a little, she offered me to rest in her house some days. There I met her family and her Reiki´s friends. And I felt very well among them.

After two days the climate changed and I came back to the route through the coast. I crossed Latina and Terracina; and I camped in the beach of Sperlonga, a small tourist centre where exists different cultivations too. Contrary to the north, in the south the great majority of its inhabitants have vegetable gardens, with commercial purposes or at least for own consumption. 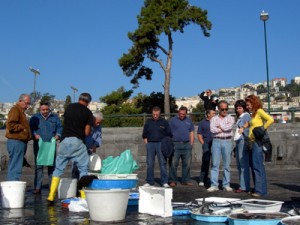 Along my trip for Europe, which I travelled almost two years, I was noticed several times about the south of Italy, mainly about Naples. People from different countries, inclusive Italians noticed me about the dangers of a chaotic city, with to many immigrants and where the robberies are frequent. Anything different to the reality of Argentina, I thought.

By this way, with a little fear I entered to Naples, but some days later I forgot my fears and I was integrated to the disorder of its streets allowing me to wrap by its people’s warmth. At the departure’s day I already had a list of telephones and people’s addresses that they offered me to stay in their houses.

To many Neapolitans the Maradona´s myth follows present yet, it was easy to find some Diego’s picture in the walls of old bars or small business; I don’t have doubt that due to Maradona the feeling between Neapolitans and Argentineans will continue forever. People told me that when Diego played in Naples, all the stolen Argentinean passports were the only ones that appeared, they were sent to the Maradona´s house. 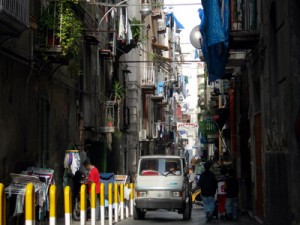 Naples is a unique city, located very near of the Volcano Vesuvius it was founded by the Greeks in the 600 B.C. and from then it has been governed by diverse foreigner’s powers. The streets of the centre of Naples are as a labyrinth and their houses often were as small as a room, it was enough to walk among streets and to sight through the doors or windows like in a room they mix the kitchen with a bed. Or to see as a whole family ate in a small space in front of their big television.

Without a doubt the concept about the family in the south of Italy is more traditional, obviously that the economic factor influences in this, but in more than an occasion I knew young people who could live alone, but for a question of habits, they still live with their parents and their grandparents.

Finally I left the city after getting some money with my sales in Vomero and in Toledo Street, in the old town; and I was sad because I wanted to stay some days more but the cold weather was coming. Naples is worthwhile.

When I left Naples I went to Pompeii, the city which was destroyed by an eruption of the Vesuvius in 79 a.C. and which remained buried under stones and ashy until the XVIII century when the excavations began. It was one of the visits that more I liked in all Europe; I was moved to see a whole city in ruins.

My next stop was Sorrento where I was very well received by Gianluiggi and all his friends and then I continued to Positano through the Amalfitana coast. According to several comments it would be one of the most beautiful routes in my trip, but I didn’t find it. May be that I has already seen too much, or that my concept about beaches and coasts are more related to tropical areas as Brazil or Africa, where the vegetation of palms is plentiful and where extensive beaches of white sand exist. But here in Europe the majority of beaches are small, many times without sand and with very poor vegetation. Anyway I found it a nice route but if people had not spoken to me a lot about the amalfitana coast I believe that I would have liked much more.

In a same way happened me about Capri, a nice island located in the gulf of Naples, with a colourful port but also with a lot of stones and little beaches.

Sometimes I convince myself that the concept of beauty between South America and Europe is very different. 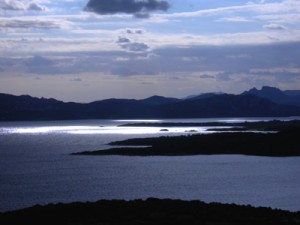 I arrived by ship to Sardinia from Naples and to my arrival the cold weather began, it was the beginning of the winter. What a pity, because perhaps Sardinia is the island more beautiful of the whole Mediterranean Sea; far from the old colonizations and from the big masses of immigrants; the island is an authentic place as few in the Mediterranean Sea, with very nice beaches and according to people, in the season with a tourism that doesn’t surpass it. Working several days in the street I could feel its people and I found them the most sociable, if I compare them with who live in Sicily, Ibiza or Mallorca.

In the capital city: Cagliari; Enrico received me, a motorbike guy who I had known behind months in the north, he also drove many km on the route.

And in spite of the cold, I ventured to travel to the north of the island; I arrived to Alghero and to the Emerald Coast among other places. 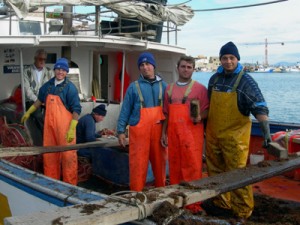 Then I took another ship to Sicily. I disembarked in Trapani with cold and rain weather, but the island anyway was as beautiful as people had described it to me. After some days I arrived to Palermo, the other great and dangerous city, which people had noticed me too. But I neither felt this; there I also met nice people. Sicily in spite of the cold and its rains will be in my nicest memories.

Finally I left Italy with to much pain; I had preferred to stay more time, mainly in the south. I feel like something is pending, but I didn’t have option, the cold weather forced me to go aboard to Tunisia.

I hope that my bicycle brings me again to this wonderful country, where I checked that its people’s hospitality is one of the better than I have known in Europe.