Lisbon is located on the estuary of the Tajo River, the capital extends up to its neighbouring populations almost reaching to the two million inhabitants. It is a cosmopolitan city, with people from all sides; Hindu, Pakistani, blacks African and Arab; and of course the gypsies, like in the whole south of the Iberian Peninsula. 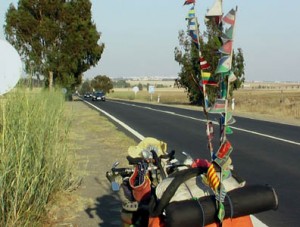 I crossed the border and I entered to Portugal with a very strange sensation. It had spent more than two months in Andalusia and they had marked me.

Sometimes I believe that I leave a piece of me in some place; some people appear and they leave their mark, and I feel that they are more than a part of my way. I remember to Che in Helsinki and Evert in Gotland. Also to my grandfather’s relatives in Sevogia or the gypsy, like I liked to call her, in Seville.

I entered more confused to Portugal than never, because maybe I had lived the stronger history of love in my entire trip. And what difficult sometimes is, to go again to the route.

But this time I went for more, because the gypsy travelled to Lagos to meet me. In spite of the wind of the 4 days I cycled with more enthusiasm than the normal, as somebody when to be in love go to look for his girlfriend. And I felt strange, because in the bottom I didn’t know very well that it would happen.

The road toward Lagos was quite hard, because on the afternoon the heat was about 40º, although it never lacked the water or the food like those days in the Danakil desert, in Djibouti. Through the long time on the route I also learned how to support it, sometimes I feel that nothing can affect me and then, in the most intense way, as everything in this trip; I accept that the heat hugs me. 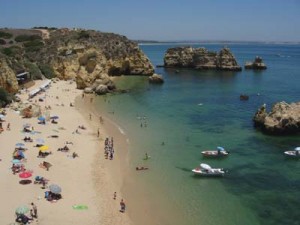 The Algarbe, the south region of Portugal is a top area for holidays in Europe; German and English tourists, among others, look for calm creeks and fishing towns to stay. For this reason I thought that to find a good place for some days won’t be easy. But the things flow when they have to be it and it was what happened this time; because the Lagos’s City Hall and the Sol e Praia Hotel offered me the free staydays for my honeymoon.

And it really was that, a true honeymoon, those which one doesn’t want that some day finishes it. But the day arrived and what was obvious happened; the gypsy and I separate and each one left with their reality, clinging to the best memories.

To continue the trip, if the woman of my life appears. But I believe that, that is something that the destination should still play me. Meanwhile the route is my great and only partner.

The route toward Lisbon was one of the hardest that I had in Europe. I left not well sleeping Lagos and almost without strength; and the wind demanded me to the maximum. By this way my road was toward the capital, sometimes crossing pass up to 400 mts of altitude and on the afternoon with a suffocating temperature.

I remember that night that I camped in Santiago’s outskirts, a town inlands that I found a good place to rest. For it I hid next to some bushes and far from some houses. But when I had my tent ready a dog that strolled over there, enrages with me. But I don’t care it, because its barks could not with my fatigue, I had cycled 105 km. 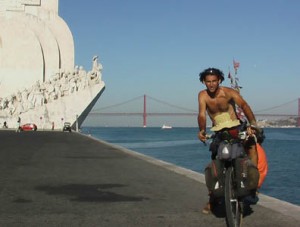 I arrived in Lisbon after 4 days of trip. Located on the estuary of the Tajo River, the capital extends up to its neighbouring populations almost reaching to the two million inhabitants. It is a cosmopolitan city, with people from all sides; Hindu, Pakistani, blacks African and Arab; and of course the gypsies, like in the whole south of the Iberian Peninsula. At the beginning I surprised myself when in the first 200 mts of the main street, five or six different people offered to me hashish, then the police told me that what they sell doesn’t pass of being nutmeg mixed with something more, according to the official the perfect combination to deceive the tourists.

A lot of people noticed me about Lisbon, but sometimes I am very trusting, and this time they made to feel myself like a true stupid. One afternoon while I was checking internet I left my handbag next to my legs and I was stolen. I carried my photo camera and some money among other things. Suddenly I looked it and it was not more. I could not believe it, this time somebody robbed me like to a 12 year-old boy. I could not make anything and I had to tolerate it, this also was part of the trip I thought, like searching a console.

At least during my days in the city, I sold well; the August Street was full of tourists. There I met Maria, an Asturias girl who worked like mime, without being cared with her university grade, because the theatre was her passion.

On Sunday I visited a Hare Krishna temple, where I checked that its philosophy every time charms me more. Up to today, the Bhagavad-Gita is the book which accompanies me. In route to the beaches I visited Oeiras, a neighbourhood in the outskirts of Lisbon. There Lochama received me, a Hare Krishna monk who takes 30 years in the movement. And to talk with him was like a blessing and at the same time an energy load to follow my trip. 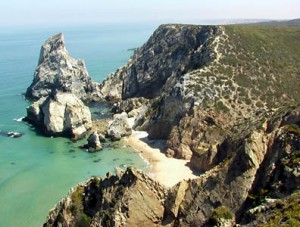 I also visited Sintra, a town among ravines and forests which conserves magnificent palaces. But without a doubt the best in Portugal was Rock Cape, the most western point in the continent. There I camped a couple of days and I enjoyed its wonderful landscapes and its sunsets on the Atlantic Ocean.

And I felt myself charmed, perhaps because I took conscience where I was, it was my Km. 43.180.

Gratefulness to: Lagos City Hall, Hotel Sol e Praia and to you: gypsy, to have let me to live this chapter of my trip