I would have wished to stay in Mayapur few days more but I had only 3 days to leave the country, and due to the police didn’t extend me the visa in Gaia, I had to get a move during the last 3 weeks. Police explained to me that there is not way to do it when it is a tourist visa, and thereby I had to leave the country. And I felt sorry, because I was missing out to attend to a Dalai Lama meeting, who as every year use to happen in Bodhgaya in January. 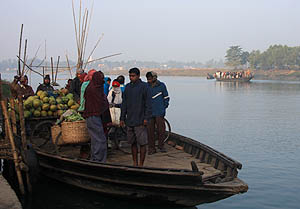 But I understood that my time in India had already finished. That last morning I got up at 4 o’clock to go to the temple, and after 6 I left Mayapur by a small boat which carried me to the other side of the river. Then, during almost 7 hours I cycled the 129 km to Kolkata. At the beginning of my cycle I was scared with the barking of a dog not only it had its bloody mouth but also it was eating another dog, who laid dead on the side of the road. Thereby at that moment I understood that my last day of cycling in India would not be one day more.

And it was like this, because the route was no longer a freeway, but a secondary road plenty of holes which took me through a lot of towns up to the periphery of the city where the chaos of 15 million people received me. Therefore I started to struggle in the middle of traffic to be able to get some space and to flow in all that chaos. To move forward in the traffic jams is a horn matter, reflexes and about smaller size. The motorbike-taxi sounds horn all time and due to their size they are who move faster thereby I just follow them as close as possible. On the other hand, the cars, in spite of the fact that they also sound horn non stop they don’t flow too much, but when they do it, it is better to disappear because they can run one over. The trucks and the buses in the city are not dangerous, but in the route they are those who impose more respect and when they begin to sound horn the best thing is to leave the road, because they don’t brake and it seems that a train is passing.

When I arrived to Kolkata I went to Sudder Street, the main area where tourists use to go. There I stopped in a nice juices shop and I ordered a banana shake with ice cream, according to Rajan, the owner of the place, their speciality, but because of they didn’t have ice cream, the boy who was serving me went to buy it to a close shop. Then he made the shake and he began to serve it me in a long glass, behind the counter, but like hiding himself from me. So I thought that something was going wrong and I came closer him, and I saw him grabbing the ice cream with his fingers and serving it into the glass. “He doesn’t think too much” I told to his boss who laughed timidly.

But I was happy, because my next country would be Thailand.